The fact that still in 2013 there are people who loudly and repeatedly say ‘climate change is a scam’ has an impact on our common future which should not be underestimated. It influences public opinion as well as the politicians in parliaments. In itself it represents possibly one of the biggest obstacles for the implementation of necessary energy reforms which can bring the use of fossil fuels to a halt.

“It’s time to stop the denial on climate change,” says U.S. President Barack Obama, and he is right. It is crucial that the climate safety movement begins to take the ‘climate deniers’ very seriously now.

Because this, dear reader, is what is going on in those fine chambers and halls of intelligent, decision-making politicians not in the last century, but in our time:

“We know, do we not, that the hypothesis that man-made global-warming was going to cause totally apocalyptical boiling in 2050 now is completely nonsens. The hypothesis is dead in the water,” said Member of the European Parliament Godfrey Bloom in Strasbourg on 15 April 2013 — the day before a vote in the parliament on a rescue-plan for EUs carbon trading system. Thanks to people like Godfrey Bloom, the rescue-plan was rejected, sending a signal to the entire world that the 500 million people of the European Union are not prepared to make their polluters pay for their carbon emissions.

The world ought to be outraged. Instead, it is in denial. And 1,200 new coal-fired power plants are being proposed worldwide, three-quarters of them in India and China.

A recent poll said that only 42 percent of Americans actually agree that global warming is “mostly because of human activity such as burning fossil fuels”, while 37 percent — around 117 million people, that is — believe climate change is a hoax. (Pew Research Center for the People and the Press, 4 April 2013)

Well, I’ve come to know some of those 37 percent. They are not just in America. They certainly are in Denmark too, in a high number. I find myself spending more and more time debating with ‘climate sceptics’ or ‘climate deniers’, rather than actually working on my mission: to create awareness about and action for climate safety. Whenever I post something, for instance on linkedin.com or I post a comment below a newspaper article, I get reactions like this one, which came from Umah Papachan on 6 April 2013:

“Climate change & global warming are scams. Global warming is a Ponzi scheme to con people and govts to give money to all these worthy causes. Journalists like yourself are advocating reducing carbon emissions so that you can paid lots of money to lie to the publica bout it!. When it is not so!”

Your can read my reply to Umah, and much more about climate scepticism here.

One thing I wrote to Umah was: What exactly is it that is so terrible about humanity shifting over to renewable energy sources and getting rid of some pollution in the air they breathe, even if those CO2-warming-calculations scientists keep coming up with should turn out to be wrong or exaggerated?

I mean, how wonderful are fossil fuels, really? According to a new study, they are this wonderful: Six million people lose their lives to air pollution illness every year — more than from AIDS and malaria combined. (Reported by Reuters on 9 April 2013: Air pollution scourge underestimated, green energy can help – UN)

Why defend air pollution?
Some years ago, as a younger journalist in the 1990s, I made a series of radio programmes which were broadcasted on DR, the public service broadcaster in Denmark, about the air pollution in Copenhagen. It was truly shocking to find out what we put up with, as citizens, in a city full of cars and emissions from power plants: An increasing amount of people suffering from asthma and allergies, an increasing amount of people even dying from it, and also increasing amounts of suffering from annoying pollen-allergy because the pollen in springtime get much more aggressive when covered with a layer of black chemicals from the fossil fuel pollution. Not to mention the tiny pollution particles that can penetrate deep into the lungs and through the body pose a huge threat to human health but go virtually unmonitored.

And that was talking about Copenhagen in northern Europe, a city where half the population takes their bicycle every morning when going to school or work. Now we should talk about Beijing, Kuala Lumpur, Mumbai, Delhi…

In other words, 43 billion euro a year invested in renewable energy would not even be an expense to society — it would just be common sense, saving a lot of people from a lot of suffering.

Previous studies have come up with some startling figures for the health toll from coal emissions: 13,200 people are estimated to die per year in the US, with over 100,000 deaths per year in India due to coal plant emissions.

I live next to a busy street, and every day we inhale car exhausts containing a range of toxic substances that can have a serious impact on our health. A new study published in the weekly journal The Lancet has found that the pollution cars emit is now one of the fastest growing causes of death in the world. They estimated that 3.2 million people died from air pollution in 2010, which was up from 800,000 people ten years earlier.


Why not just get it over with?
So, climate deniers: Even if we were to park the debate over climate change for a moment… then what is it that is supposed to be so terrible about accelerating the switching over to renewable energy sources and clean air to breathe?

Except of course, that those of you who are dependent on the fossil fuel industry for an income, will have to start thinking about finding a new business or workplace. Well, too bad. We know that oil and coal reserves run out at some point not too far away anyway. And we know that fossil fuels aren’t good for our health. So, the transition has to start, and why create so much resistance against making a quick move now — and then as a bonus get those threatening CO2 climate disasters under control, now that we have the technology more or less in place? — yes, certainly, there’s still lots of room for improvement, but fundamentally, the technology is there, ready to roll.

Quite simple — only one single thing stands in the way: these people who make their salaries by producing or selling us oil and coal — and all products that run on fossil fuels. Along with those characters who receive payments from the fossil fuel industry to actually sit and create disinformation and ‘noise’ in the flow of information about climate change — so that any climate activist out there, like myself, end up spending endless time and energy on debating with them.

I find it frustrating how that ‘noise’ and smoke-screen of climate deniers drag out decision-making and confuses public opinion. I’d like to see that air pollution right outside my door disappear. And I’m seriously tired of those threats of climate disasters. I’m tired of irresponsible politicians who do not understand that they need to act, even if they don’t have everyone with them. Humanity must move on now, because we don’t have much time.

Well, not all politicians, I should say. For instance, watch Bernie Sanders here — an Independent U.S. Senator from Vermont — who spoke like this in the U.S. Senate:


And on 11 April 2013, the American President, Barack Obama, finally stepped directly into the climate denial debate, and started saying it outright, for instance on his Twitter profile: “It’s time to stop the denial on climate change.”

And how do we do it? By following Obamas example. Speak up! Argue against the denial whenever you see or hear it. Spread awareness about what it is the climate scientists are warning us about. Awareness and knowledge are the only tools we have to combat the denial.

If climate scientists’ calculations prove to be correct, we are currently witnessing one of mankind’s greatest scandals and crimes. We have their names. Godfrey Bloom, for instance. But I assume there will probably not be a single one of these climate deniers held responsible for their crimes to humanity. Who are going to drag them to court and punish them by the time when they have either died of old age long ago, or by the time when people have many other much more acute and urgent survival problems to think about?

“Scientists tell us that we have no hope of holding the rise in the planetary temperature below two degrees unless global emissions peak by 2015. (…) Unlike gay rights or similar issues of basic human justice and fairness, climate change comes with a time limit. Go past a certain point, and we may no longer be able to affect the outcome in ways that will prevent long-term global catastrophe. We’re clearly nearing that limit and so the essential cowardice of too many Democrats is becoming an ever more fundamental problem that needs to be faced. We lack the decades needed for their positions to “evolve” along with the polling numbers. What we need, desperately, is for them to pitch in and help lead the transition in public opinion and public policy.

Instead, at best they insist on fiddling around the edges, while the planet prepares to burn.”

We must move on now, and leave the sceptics behind, because it makes sense. We have 99.84 percent of all climate scientists on our side. I’ve scanned the field, quite thoroughly really, in the past three months — and I have seen nothing that doesn’t make common sense about switching over to clean energy. Renewables are ready — they are only waiting for our demand.

I have learned, in that same period, that I am not the only one who is tired of these things, and who is calling for some plain common sense. We are a growing group of people, and thanks to the Internet, we are beginning to find each other, support each other, encourage and inspire one another.

Right now my feeling is that there is a massive, global movement on its way up — we just need the right catalyst, and then a bottom-up people-to-people powered ‘Stop The Fossil Burning Madness’ revolution will take off. The Global Spring.

Don’t believe me? Wait and see.

I read somewhere that a survey said that around 10 percent of the population in Europe, USA and Australia are alarmed about the climate change. If that holds for the rest of the world, then we are already 700 million people, and probably more — because the inhabitants in the poorest countries of the world are getting increasingly worried about that melting ice and those rising sea levels — on this planet who are alarmed. 10 percent doesn’t sound of much, but 700 million does.

All we need to do, very quickly now, is to join forces, connect, and begin to speak with a stronger and more united voice.

Climate denier quote of the day

“What the world’s climate alarmists are asking us to do is immoral.”

More about climate denial and disinformation 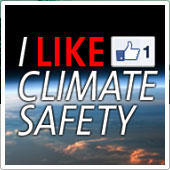