With all the knowledge that I have about global warming and with what I see happening around the world — extreme weather, downpours, droughts, heatwaves, superstorms — I now believe that the situation is so serious and urgent that I no longer can defend flying. Thus I will stop doing so.

I am deeply worried about what is happening to the climate. As a theoretical physicist I have followed the research in climate science during the past 20 years. I worry that our window of opportunity is closing as the climate system is being pushed so far out of balance that dangerous tipping points are reached. We cannot allow that to happen. It could be a catastrophe for mankind.

The problem with the climate system is that it is non-linear. This means that there are ‘run-away’ mechanisms, such as the huge amounts of methane gas stored in the Arctic, which is now being released as the Arctic is warming and which adds on to the warming. There are several of such ‘positive feedback’ mechanisms in the climate system.

We must bring our emission of carbon dioxide to a halt and begin to remove what we have already released from the atmosphere. I believe that we must all do what we can and we must act now.

Like many others I have enjoyed cheap flights around the world and for too long I have tried to convince myself that my contribution to global warming is insignificant. But I no longer believe this to be true. I believe that for us to solve this problem we must all act together and we must all take responsibility. I don’t want to be a part of the problem, I want to be a part of the solution.

I can’t look my nephews and nieces in their eyes well knowing that my actions jeopardise their future. I have come to view my carbon emission as a moral issue.

We all know that flying is terrible for the climate. Will it save the planet if I stop flying? No, probably not, but if we all start to take responsibility for our actions, if we all do what we can, and above all, if we elect politicians, who truly understand this problem and act accordingly, then I think that we can. And what is the alternative? To just lean back and watch it all fall apart?

Like many others I have flown a lot and thus I don’t have the moral high-ground to point fingers at anyone (which I don’t want to do anyway). But it is my hope that my decision can inspire others to do something similar. And that I can be inspired by the actions of others to do even more. Lets stop being part of the problem and instead become a part of the solution.

I have spent my entire adult life studying and doing research in theoretical physics. That work only makes sense if I believe that we have a future. Why search for truth if there will be no future generations to continue that search? Why find answers if there will be no one left to appreciate them?

During my time in academia I have talked to a large number of people about climate change, both experts and laypeople. And it has been my experience that those, who worry the most, are also those, who understand the problem the best. The researchers in climate change that I have met have all been deeply worried about our future and alarmed by our inability to act forcefully. Those, who think that “it will all be okay” are in my experience also those, who have not studied this problem. This observation is in itself deeply worrying.

Someone recently told me that Einstein was once asked what he would do if he was told that the world would be destroyed in an hour. Einsteins supposedly replied that he would spend the first 59 minutes trying to understand the problem and then use the last minute to fix it. I don’t know if this anecdote is true but there is truth in it. We cannot give up. What we need now is action. We already understand the problem, what we need to do is to fix it.

I find our common humanity immensely beautiful and important. It is definitely flawed but that doesn’t mean that it isn’t worth fighting for. It is. I pray that we will.

Jesper Grimstrup is a Danish PhD researcher in theoretical physics. He posted this proclamation on Facebook on 21 August 2018 at 20:43. It has been republished here with his permission. Below are some of the comments his Facebook post recieved.

» Swedish Facebook page: ‘We stay on the ground’:
www.facebook.com/vihallerosspajorden

“You have just arrived from Britain [to Denmark] today. Did you have a good flight?”

“It is a very high source of emissions, and I think it is important – those of us who genuinely ARE concerned about climate change, demonstrate that we can still lead reasonable lives in a modern society without having incredibly high emissions.”

“I think it is more fanatic to assume that we can live with four degrees Celsius of warming and all the chaos that that will entail. So I think the fanatical response is the business as usual – the norms that a small elite of us have brought about. So I think it is NOT fanatic – it is almost the opposite.” 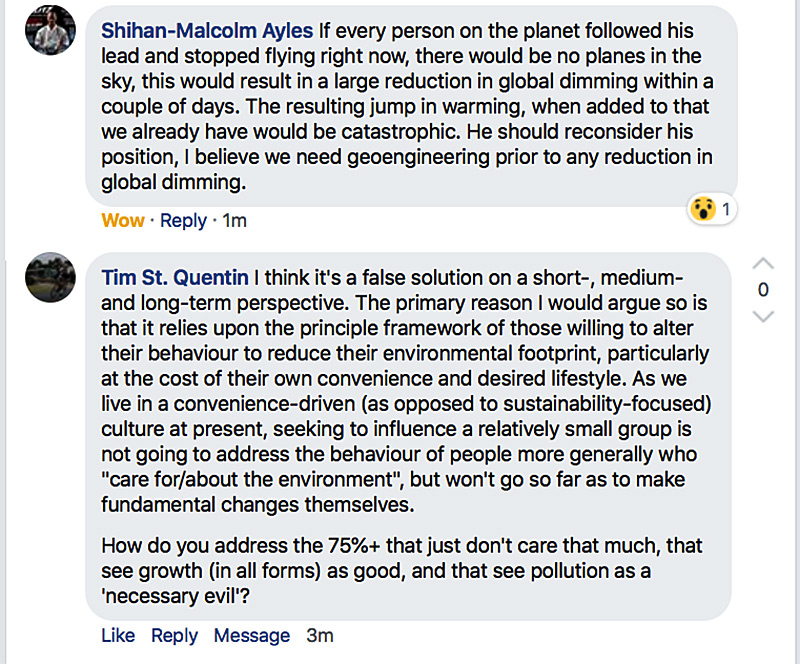