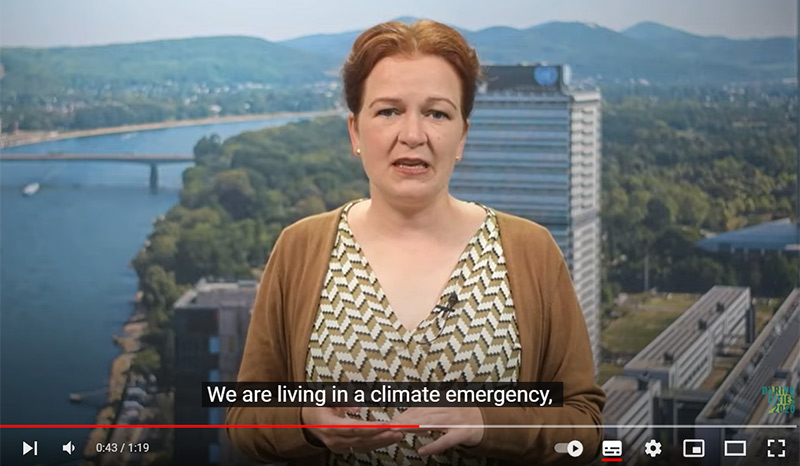 “We are living in a climate emergency. At Daring Cities 2021, we want to show what leadership looks like in times of climate emergency,” said Katja Dörner, mayor of Bonn in Germany, as she welcomed 1,200 delegates to the five-day virtual conference.

“First, all governments should declare a climate emergency, similar to declaring a pandemic, such as the Covid-19 pandemic, and this at a local, regional and even national level. As of today, more than 2,000 jurisdictions world-wide have already taken this very first decisive step. The second step is to set up enabling frameworks, encouraging and supporting innovation, designing and implementing decarbonising policies,” said Gino Van Begin, Secretary-General of ICLEI Local Governments for Sustainability, in his opening remarks on the first day of the conference.

Around half of the 290 local and regional governments that were represented in the conference had declared a climate emergency, while many stated during the five days of talks that they are still working on making it happen. 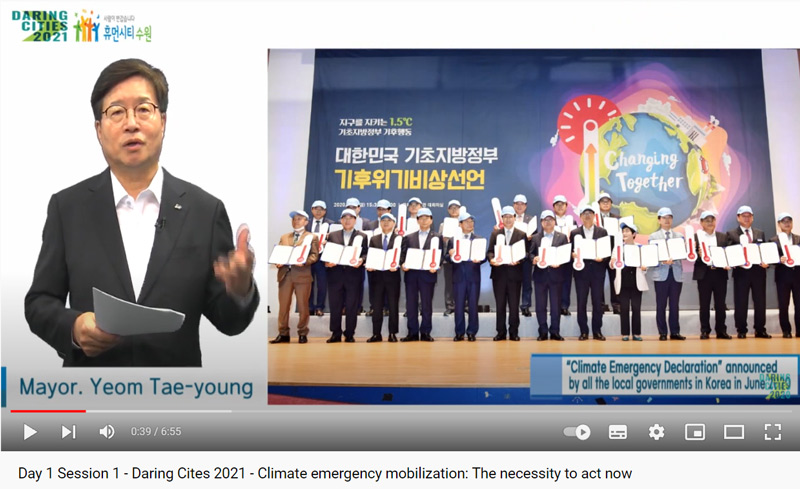 Suwan, Korea: Emergency response resolution
One of the first sessions at the conference was entitled ‘Climate emergency mobilization: The necessity to act now’. Here, the Mayor of Suwan in Korea, Yeom Tae-young, explained how in June 2020, a climate emergency declaration was announced by all the 243 local governments in Korea, and that this lead to the adaption of a Climate Emergency Response Resolution by the Korean National Assembly in September 2020. The local governments later announced their commitment to carbon neutrality. “Let your actions speak louder than words,” Tae-young stated at the end of his presentation.

Daring Cities: Inspire radical actions
The online conference ‘Daring Cities 2021’ was organised by ICLEI Local Governments for Sustainability, supported by the City of Bonn and the governments of Japan and Germany, among others, and it was marketed as ‘The global virtual forum for urban leaders taking on the climate emergency.’

The aim of the conference was to show and discuss, share what cities and regional governments are doing – to inspire “radical actions to tackle the climate emergency and to create a vision of what we want our cities, towns and regions to look like by 2030.” 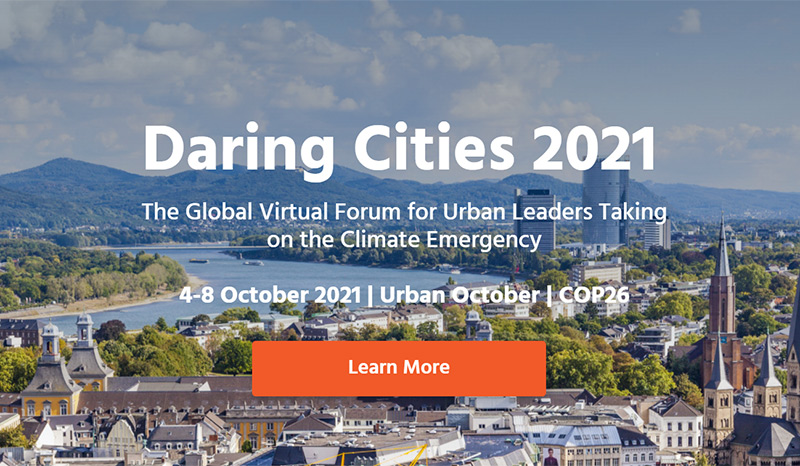 Rise to the occasion
Reporting from the conference, Mark Wessel wrote in an article for ICLEI’s website, titled The starting point for handling our climate emergency? Treat it like a house on fire:

If we’re going to take climate change seriously, we need to treat it like a house on fire. That analogy came from not just one, but two presenters in two separate ICLEI Daring Cities sessions yesterday, hailing from two different continents.

“If your house is on fire, then everyone needs to respond to put it out… everybody needs to act to adapt and mitigate (climate change),” said Oliver Moran, Deputy Lord Mayor of the City of Cork. Moran, who is also Chair of the city’s multi-departmental Climate Action Committee went on to observe that not unlike when a house is burning, there needs to be a sense of urgency that is parlayed into action that is “cross functional… and is reflected across the organization,” tied to initiatives ranging from flood early warning systems to intelligent transportation projects.

Meanwhile during the “I’ve Declared a Climate Emergency, What Do I Do Now?” session, Margaret Hender, the Co-Founder of Australian grass roots organization CEDAMIA noted that when a declaration of a climate emergency is made by any level of government “it signals that the government itself will be acting as if our house is on fire,” making members of the public realize that “government needs to make different decisions than normal, about budget allocations, deployment of the workforce… and also to set different behaviour guidelines for the community for the duration of the emergency.”

Hender went on to observe that the significance of formally declaring a climate emergency for the benefit of the general public is that “in times of emergency ordinary people tend to rise to the occasion and act collectively for the common good in ways they might not in normal times… so they need to know very clearly that it is an emergency.”

Declaring climate emergency: a game changer
Speaking on behalf of the London Borough of Hammersmith & Fulham, Stephen Cowan said the net effect for his city of declaring a climate emergency in 2019 and setting a goal of becoming carbon neutral by 2030 had been “a game changer in the way we’ve worked with residents and many other local groups.”

Cities have to stop trying to “build compromise into solutions” in the face of naysayers and instead “have the courage to make future focused decisions on behalf of our communities,” Cowan’s co-presenter Mayor Hawkins of Dunedin said. 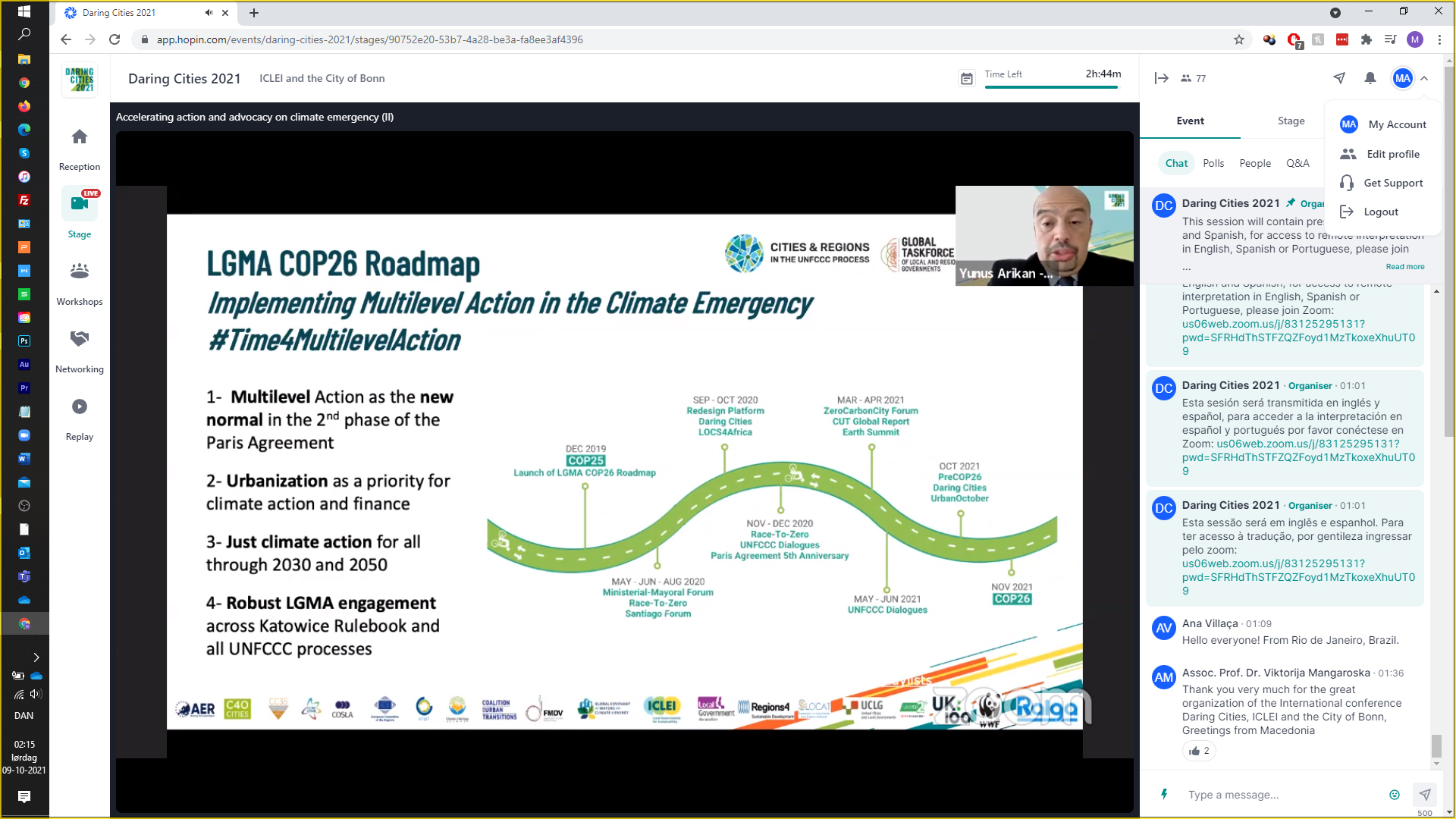 Daring Cities builds on the experience that ICLEI gained in producing the Resilient Cities Congress over ten years. The goal of the Resilient Cities Congress was to elevate urban resilience to the global stage and raise its priority in international agendas such as the Agenda 2030, the Paris Climate Agreement and the Sendai Framework for Disaster Risk Reduction. Daring Cities has expanded on these themes “to create a new platform to advance local governments’ work to respond to the climate emergency in both mitigation and adaptation strategies.”

“Through our Resilient Cities Congress, we created a vigorous community of resilient development practice at a time when no one was talking about resilience. As we look towards our next ten years of work, we want to urgently focus on the current climate emergency and the need to act boldly. While national and global leaders are struggling to address this urgent crisis, the daring actions of local leaders are spreading around the world. Daring Cities will recognize and empower these courageous leaders,” said Gino Van Begin, Secretary General of ICLEI.

ICLEI Local Governments for Sustainability is a global network working with more than 2,500 local and regional governments committed to sustainable urban development, active in more than 125 countries.

Daring Cities is supported by major contributions from the Federal City of Bonn, the Federal State of North Rhine-Westphalia (NRW), the Foundation for International Dialogue of the Savings Bank in Bonn, the Ministry of the Environment of the Government of Japan, and the Federal Ministry for Economic Cooperation and Development (BMZ) of Germany.

This article was first published on www.climateemergencydeclaration.org and was republished here with permission.